In 2002, poet Jennifer Frank agreed to trade her poems for my art. We each then responded to the work received, and traded again. It was fun, so we continued, and in April 2004 we exhibited Cross Pollination at Harwood Art Center. After installation, we drew “pollen” lines on the floor with yellow contractor’s chalk, so viewers could trace the path of exchange between art and poems. The pollen lines then dispersed as viewers walked over them for the next few weeks, until the show closed. 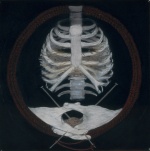